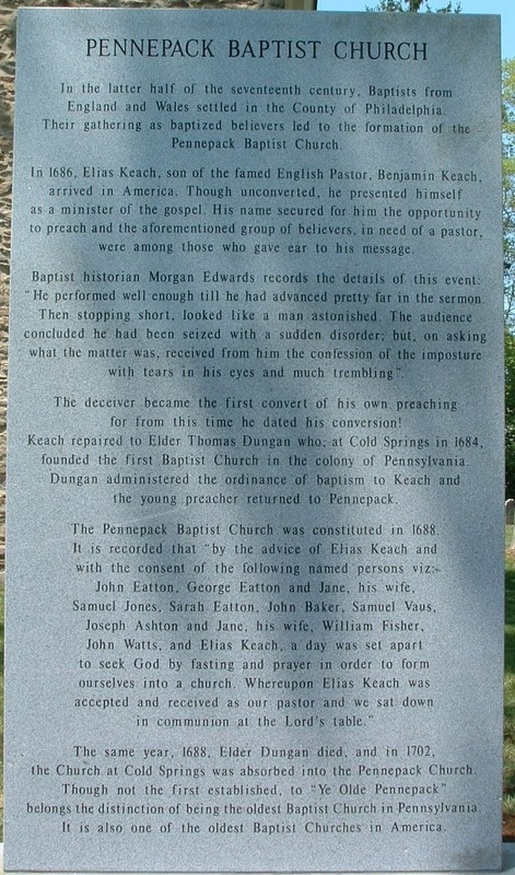 The Amazing Drama Behind Pennepack Baptist

Welcome to the story behind Pennepack Baptist Church, established in 1688, and now in its 320th (at the time this was written)  year of ministry. It was the 8th Baptist church to be started in America, and the 7th oldest still surviving. When the church began, composers Johann Sebastian Bach and Frederick Handel were 3-year old toddlers. Hymn-writer Isaac Watts was just a lad of 14. Revivalist Jonathan Edwards, so instrumental in setting the foundation for ‘The Great Awakening’ would not be born for another 15 years, Benjamin Franklin two years after him, and George Washington 26 more years after Franklin.

The Pilgrims had only landed 68 years earlier. Banks had only been using checks for 7 years, firemen only had the use of flexible hoses for 16 years, and watches only had minute hands for 18 years. These are the statistics and they are amazing, but they are not the story. And the story is always more exciting than the statistics. Every good story has a good beginning. Pennepack Baptist has a wonderful beginning to its story, especially due to the many varied influences that fed into the stream that became Pennepack Baptist Church.

These influences were Divine, of course, and human, political, geographical and with a touch of Shakespearean-like drama, as we shall see. Here is a brief telling of the unique story of that drama that led to the founding of Pennepack Baptist Church and the Philadelphia Baptist Association. In the mid-1630’s, a man named Roger Williams took off into the Massachusetts woods banished from preaching and any involvement in the Massachusetts Bay Colony due to his dissenting views—including his conviction that no one should be persecuted for holding dissenting or different religious opinions. In 1638, he would help establish the first Baptist church in the new world in the town of Providence in what would be the colony of Rhode Island. In its charter, the colony would grant freedom of conscience and religion, something not so granted in either England or Massachusetts. Forty-six years later, in 1684, the Rev. Thomas Dungan, originally from Ireland, would leave Rhode Island and travel south to bring a Baptist presence to a place where similar freedom of worship and conscience was being established. Dungan would die four years later and the church he started at Cold Springs near the Delaware River would only survive until 1702. However, the events that he would take part in his final year of life on earth would certainly be viewed as a crowning experience of his life and could easily be argued that his ‘Divine appointment’ was to be the right man, in the right place, at the right time.

The place that Rev. Dungan moved to was called ‘Penn’s Woods’ or Pennsylvania. An English Quaker named William Penn had received a land grant from Charles II in lieu of money that the King had owed his father. Penn set up his ‘Holy Experiment’, as he called it, in 1682, erecting the Village of Philadelphia and opening the colony’s doors to all who would seek to be free of religious oppression. Many from Wales, England, and Ireland came over, among them a group of Welsh farmers who settled north and east of the village. These men and women, Baptist in their convictions, along with other Irish and English of the same mindset, would become principle characters in the first act of the drama we alluded to earlier. 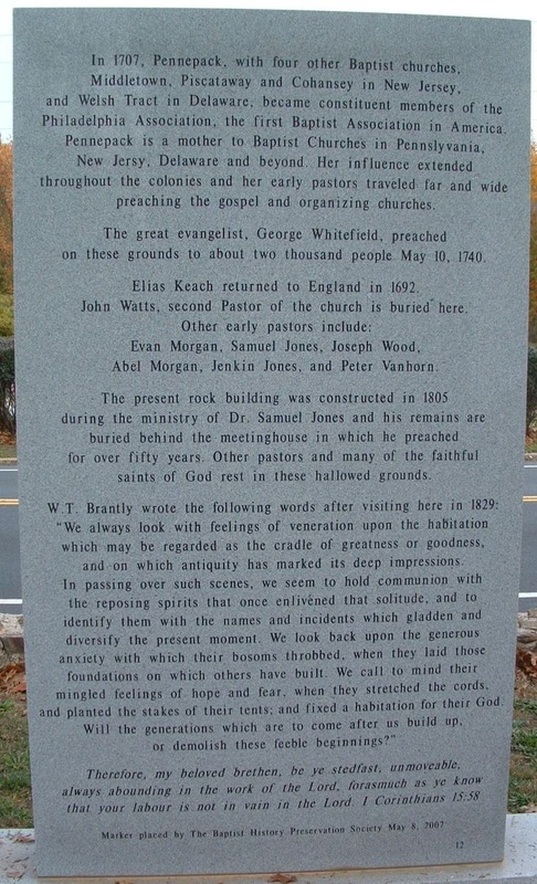 The stage was now set. Most of the characters were in position, it awaited only the ‘Chief Actor’ to appear on the stage [that term being chosen very purposefully here]. To build some anticipation for his entrance a little background is needed.

In the year 1640, Benjamin Keach was born in England. In his teen years he would be baptized into the Baptist branch of the Christian faith tree and at age 18 would become a preacher. In 1666, the year of the great London fire, he and his wife had a son whom they named Elias [Elias being another version of the name Elijah, the passionate and fiery prophet of the Old Testament]. Perhaps great hopes had been laid upon Elias’ tiny head, to carry the mantle of this great man of God.

Benjamin would himself become a champion of Baptist ideals and opposition to religious oppression, seeing his books burned and spending time in prison and in the Pillory [known also as ‘The Stocks’, with his head and hands enclosed]. Much has been written about Rev. Benjamin Keach, but not much is known about Elias’ early life.

What we do know is that Elias eventually sailed across the ocean to land in William Penn’s new colony in 1686, a twenty-year old young man in whose suitcase was a black robe and a white band. Why did he come to the new world? Did he come over to escape persecution in England and to be free to worship God as he pleased, as his father had taught? Was he sent here by dad to begin a Baptist work so that there could be a father/son trans-Atlantic connection in the spread of Baptist principles and influences? Or, was he here to escape his father’s influence; here in Penn’s Woods to be free to not worship God [as Penn also permitted]? Was he a prodigal son, not yet come to his senses? What would it take for that to happen?

Why do we suggest such negative motives for young Elias? Because, of course, we know the story already! We know that he was, as early reports related him to be, a ‘very wild spark’ or ‘wild scamp’, whose preacher’s black robe and white band were not secured by calling or training, but were used for ‘sport’ as he pretended to be a preacher for the fun of it.

Why would anyone want to hear him preach? He had no church or letters of recommendation. Because of his famous father, obviously! Elias was a brazen and bold young man, who, like the prodigal in Jesus’ story, had traveled to a far country and was spending his ‘inheritance’, only in a most unusual way. But the Heavenly Father had a plan for the young prodigal. The stage was set to bring the plan into play. It only needed Elias to walk upon it.

Somehow, those Welsh farmers living north and east of the Village of Philadelphia, and their Irish and English friends, heard that Elias Keach, son of the cherished Benjamin Keach was right here in the new world. And apparently, he was a preacher himself. What an opportunity! The invitation went out. It was accepted, brazenly and boldly. Surely, they couldn’t wait to hear him speak. So the young actor took center stage and began his charade.

What did young Elias preach on? We’re not sure. Perhaps he had some of his fathers’ written sermons that he would read from. Or maybe he could recall from memory what dad had said and imitate whatever arm motions his father might have employed. What was his theme? Was it love, grace, sin, repentance? Did he listen carefully to what he himself was preaching, even if it was just a performance?

What was Elias saying when his heart began to flutter and speed its beating as his conscience sounded the loudest alarm he’d ever heard? What was the last word to leave his lips before he fell to the ground weeping under the weight of Holy Spirit-sponsored conviction and dread? We do not know. What we do know is that when his surprised group of hearers rushed over to him, out of concern that he might be gravely ill, with shame he informed them of the true nature of what they had witnessed. He was an ‘imposter’ who was now fearful for his soul and desirous of the mercy of God.

To his hearers credit they did not turn their backs on this pretentious actor who had made fools of them for ‘sport’. Instead, they had mercy on him and took him to Rev. Thomas Dungan, now in the last year of his life and waiting in the wings, though unknowingly, to play his special role in the unfolding drama. Tenderly, Dungan would lead the humbled young Elias to a surrender and commitment of that fluttering heart to Jesus Christ. He would baptize him and mentor him in the ways of a true follower of the Master. 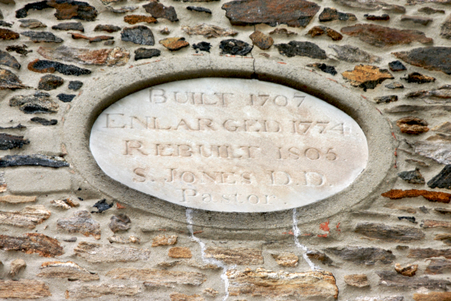 Did Elias, newly reborn and come to his senses, get on the first ship back to England to leap off of it and into his father’s arms, the prodigal returned home, the son who was dead now alive? What else was there for a former ‘wild scamp’ to do? No, he did not. God had other plans, just as wonderful.

That if that group of once deceived farmers opened their arms and hearts to receive the reformed actor as their Pastor? What if young Elias became passionate about speaking the good news of the mercy of the Savior and the story of his own conversion at the hands of that mercy?! How amazing would that have been? And that is exactly what they did, and what he did. And thus was born the Pennepack Baptist Church in 1688. In the following year Elias would travel many miles to preach, baptize and otherwise assist in the developing of communities of the Kingdom, down in the village of Philadelphia, around Pennsylvania, New Jersey and elsewhere. Even though Elias would not pastor Pennepack Baptist after 1689, his missionary zeal and efforts, as well as that of others, such as John Watts, who succeeded him as Pastor, would establish a pattern for Baptists to follow. For a while the various churches would meet twice a year at different locations to hear the word preached and fellowship with one another. Then in 1707 it was agreed that they should more formally commit themselves to one another and to uniting in the work of the Lord. Pennepack, along with four other missionary-minded churches, Cohansey, Middletown, and Piscataway in New Jersey [now Stelten Baptist], and the Welsh Tract Church in Delaware, formed the very first Baptist association in America, the Philadelphia Baptist Association.

Today, Pennepack Baptist and the Philadelphia Baptist Association are both in their fourth century of shared ministry, each seeking to continue the legacy of mercy, mentoring and mission that was so central to the amazing story of Elias Keach’s conversion, the forming of Pennepack Baptist and all that followed. It is no exaggeration to say that many millions of Baptists who have gone under the waters of baptism across this nation can trace their spiritual heritage back to the Philadelphia Baptist Association and Pennepack before it, who in turn trace their heritage to the influences of those from New England, England, Wales and elsewhere. All of these, of course, trace their spiritual heritage back to a small band of disciples, followers of the crucified, but now risen Christ, who gathered together on the Day of Pentecost, nearly 2000 years ago, to receive power from on high to make mercy, mentoring and mission the one true pattern for all to follow.

That is the story behind the statistics. A drama that not even Shakespeare could have imagined and penned. It comes from the heart and hand of the One who makes all stories possible. To God be the glory!


We hope you enjoyed reading about the early history of Pennepack Baptist. It was an exciting time, for sure. But the same God who put that drama together is at work today! Pennepack Baptist is still a place where someone can discover the mercy of God, and where someone can be mentored [discipled, trained] to be a passionate follower of Jesus Christ who knows what his or her mission is in life. That someone could be you, or someone you know who needs to find a church home and a place to grow spiritually. Call the church at 215-673-4410 or use the Contacts Button
[Written Sept. 7, 2007 by Tony Tilford with his wife Jean Marie]